Neuroinflammation, characterized by activated microglia and infiltrating T cells, is a prominent pathological feature in neurodegenerative diseases. However, whether this inflammation contributes to neuronal injury or is a late consequence of neuronal injury is unclear. In this issue of the JCI, Brochard et al. report that CD4+ T cells are cytotoxic in a mouse model of Parkinson disease (PD) (see the related article beginning on page 182). Specifically, invading T lymphocytes contributed to neuronal cell death via the Fas/FasL pathway. The results implicate the adaptive immune system in the pathogenesis of Parkinson neurodegeneration and provide a meaningful rationale for immune-based therapies for PD. 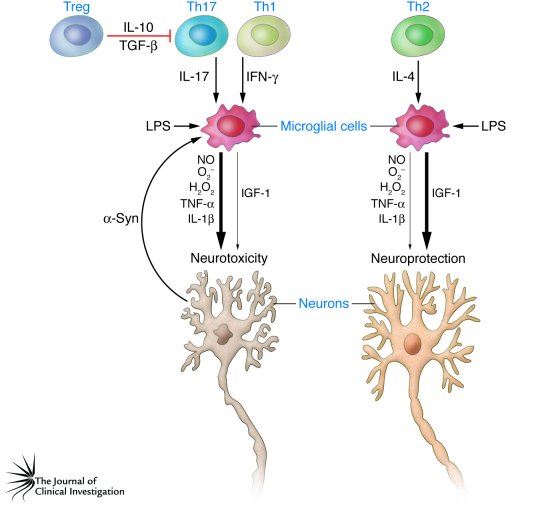 On the left, the presence of Th1 and Th17 cells upregulates (thick lines) the production and release of free radicals from microglia, including NO, superoxide (O2–), and hydrogen peroxide (H2O2) as well as proinflammatory cytokines such as TNF-α and IL-1β, and downregulates (thin lines) the release of neurotrophic factors such as IGF-1. The result is enhanced neuronal injury, which may trigger the release of increased levels of nitrated/oxidized α-Syn and enhance microglia-mediated neurotoxicity. Tregs can suppress the proinflammatory effects of Th17 cells. On the right, Th2 cells release IL-4, upregulating the release from microglia of neuroprotective IGF-1, downregulating release of free radicals, and resulting in enhanced neuronal protection.