Parkinson disease (PD) is a neurodegenerative disorder characterized by a loss of dopamine-containing neurons. Mounting evidence suggests that dopaminergic cell death is influenced by the innate immune system. However, the pathogenic role of the adaptive immune system in PD remains enigmatic. Here we showed that CD8+ and CD4+ T cells but not B cells had invaded the brain in both postmortem human PD specimens and in the 1-methyl-4-phenyl-1,2,3,6-tetrahydropyridine (MPTP) mouse model of PD during the course of neuronal degeneration. We further demonstrated that MPTP-induced dopaminergic cell death was markedly attenuated in the absence of mature T lymphocytes in 2 different immunodeficient mouse strains (Rag1–/– and Tcrb–/– mice). Importantly, similar attenuation of MPTP-induced dopaminergic cell death was seen in mice lacking CD4 as well as in Rag1–/– mice reconstituted with FasL-deficient splenocytes. However, mice lacking CD8 and Rag1–/– mice reconstituted with IFN-γ–deficient splenocytes were not protected. These data indicate that T cell–mediated dopaminergic toxicity is almost exclusively arbitrated by CD4+ T cells and requires the expression of FasL but not IFNγ. Further, our data may provide a rationale for targeting the adaptive arm of the immune system as a therapeutic strategy in PD.

Lymphocyte infiltration in brains of patients of with PD. 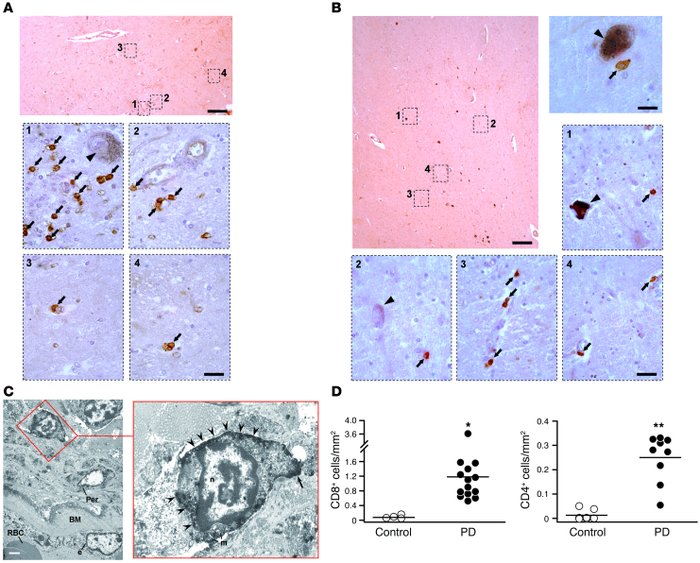